Build ’em by the Mile, Cut ’em off by the Yard by Steve Gilford

Build ‘Em by the Mile, Cut ‘Em off by the Yard: 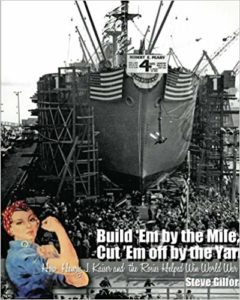 “This book is about a time when millions of Americans put their hearts, minds, and bodies into a clearly recognized goal, defeating the forces of Germany and Japan. The stories of the people who accomplished this are a reminder of the potential of this nation to rise up and meet a challenge. The Second World War is long over [but] once again, vital challenges face us. When they seem overwhelming and when the task seems as though it might be too much for us, we can turn to the example of America’s World War II home front and in particular to the Kaiser Shipyards in Richmond, California.” – Congressman George Miller

Be the first to review “Build ’em by the Mile, Cut ’em off by the Yard by Steve Gilford” Cancel reply