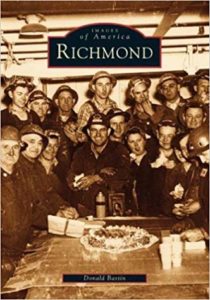 Spanning from the shores of San Francisco Bay to the rolling hills of the San Pablo Ridge, Richmond is a city with a history as diverse as its citizens. From its beginnings as a part of Rancho San Pablo, Richmond has evolved through the years into a vibrant, modern city with many types of industries and communities. However, many people have never seen the Richmond of yesterday, with its massive shipbuilding operations that employed thousands of steelworkers, both men and women, during World War II. At one point in the 1940s the city’s shipyards had nearly 100,000 workers turning out Liberty ships and other vessels by the score for the war effort. Richmond also boasted a Ford assembly plant, rail yards, and myriad small industries to support them.

In this volume, more than 200 vintage photographs compiled by author Donald Bastin, the former director of the Richmond Museum of History, tell the story of a Richmond that was and may never be again. Richmond’s heavy industrial days are mostly gone now, but anyone who sees these striking images is bound to gain a newfound respect for the thousands of men and women who worked here to build a future for themselves and their country.

Be the first to review “Richmond, California (Images of America)” Cancel reply