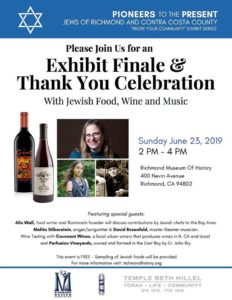 Alix Wall will speak about contributions of Jewish Chefs in the Bay Area.?Wall, founder of The Illuminoshi: The Not-So-Secret Society of Bay Area Jewish Food Professionals, will be joined by Berkeley-based Covenant Winery and Perfusion Vineyard, a Richmond business farmed and owned by surgeon John Bry.

Musicians Melita Silberstein and Dave Rosenfeld will round out the program.

Guests of all ages are welcome but must be age 21+ with ID for wine tasting.

This is a FREE event. Fred Rosenbaum speaks about his book, Taking Risks, the story of Joseph Pell who was a partisan fighter during World War II. Joseph made his way to California after the war and eventually founded Moo’s Ice Cream in Richmond.

Fred Rosenbaum, the Founding Director Emeritus of Lehrhaus Judaica, led the?school for 44 years until 2017. He has written eight books on modern Jewish?history including?Cosmopolitans: A Social and Cultural History of the Jews of the?Bay Area?(University of California Press, 2009).?According to Kevin Starr, ?no?single community has contributed comparably to the rise and development of this?region?and no book tells this story better than Fred Rosenbaum?s.?

His book?Taking Risks?(with Joseph Pell) was praised by Michael Krasny as??especially compelling,? and his?Out on a Ledge?(with Eva Libitzky), an Amazon?bestseller, was deemed ?honest and piercing, unsentimental and yet deeply?moving,? by Michael Berenbaum, Founding Director of the United States?Holocaust Memorial Museum. Rosenbaum?s work has been translated into a?dozen foreign languages.

Among many honors, he won the Anne and Robert Cowan Lifetime Achievement?Award for outstanding writing on Jewish themes by a Bay Area author and was?the first educator from Northern California to receive the Award for Exceptional?Jewish Educators from the Covenant Foundation in New York.?He has taught at several Bay Area universities including the Graduate?Theological Union, lectured widely in the United States and abroad, and has?been the traveling scholar on numerous Lehrhaus study tours ? to Eastern and?Western Europe, Israel and the Middle East, South America and Cuba, the?American South, and his native New York.

Local authors Julie Freestone and Rudi Raab speak on their novel Stumbling Stone (2015, Alvarado Press).How likely is it that the daughter of Jewish immigrants would cast her lot with the son of a high-ranking Nazi? However improbable, reporter Sarah Stern and German-born, Berkeley, California cop Karl Schmidt fall in love and embark on an all-consuming quest, probing his tangled past and the family?s sinister secrets.?Stumbling Stone?chronicles their?journey across two continents and the discovery of horrifying surprises they never could have imagined. 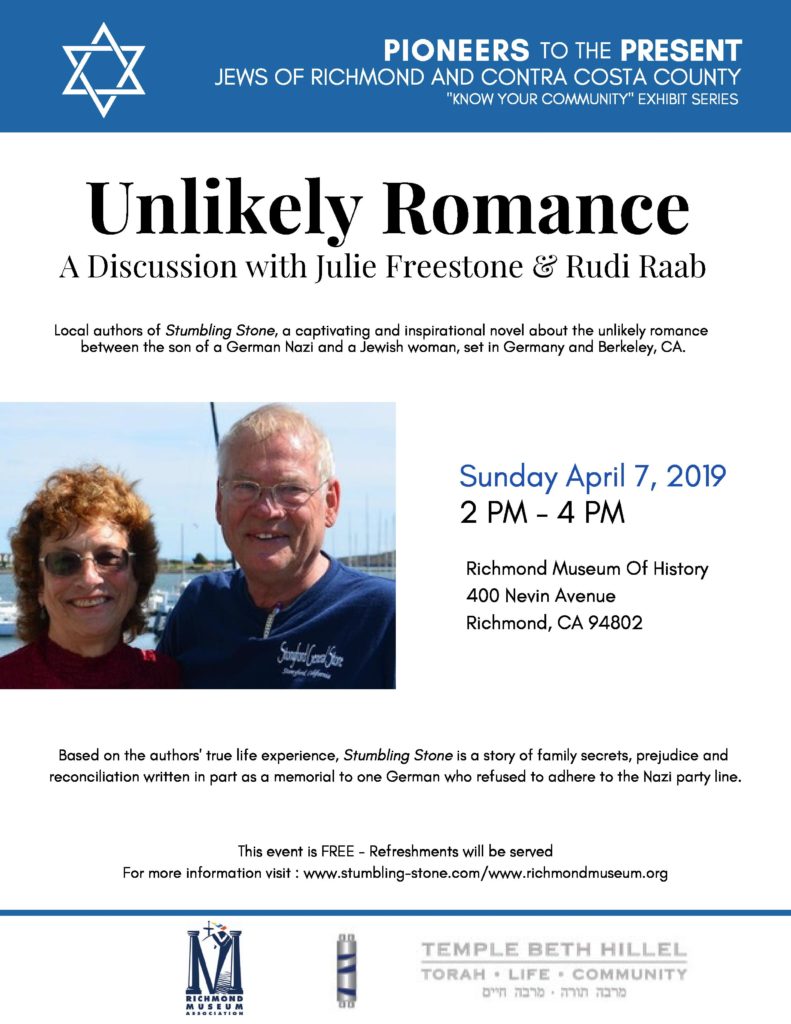