? ? ?? ? ? The museum will host a free?reception on?Sunday?August 7 to open the new?exhibit?Accessories, Accessories, Accessories!?August 7th is also Richmond Day commemorating the incorporation of the city in 1905, so join us and celebrate Richmond! The theme of the reception?is Bouquets, Big Hats, and Bow Ties, so everyone is invited to dress to impress and wear their best accessories. Enjoy fresh cut flower arrangements from local florists in the permanent exhibit and stroll through?the museum’s?Historical Monument & Rose Garden, which will be in full bloom! Don?t miss the group photograph to be taken on the Museum steps at 2:00PM to mark the occasion. 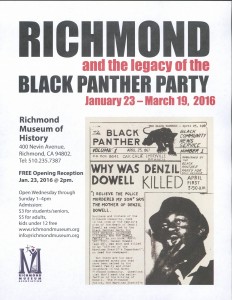 Music: A Reflection of Richmond (July through September 2015)
The exhibit presents visual survey of music through time in Richmond from the Native American period, through the Blues Clubs in North Richmond, to the free music festivals of today. The show includes artifacts such as musical instruments, sheet music, accessories from orchestra, ephemera from musical events at the WWII shipyards, newspaper clipping and photographs from the museum and personal family collections. 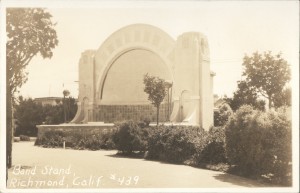 Richmond Day at Panama Pacific International Exposition (July through Dec 2015)
Celebrate the centennial of the PPIE with a mini exhibit of expo related artifacts from the museum’s permanent collection. The show features artifacts such as postcards, souvenir books, ribbons, textiles and a medal made by Shreve & Company commemorating Richmond Day on August 7, 1915. 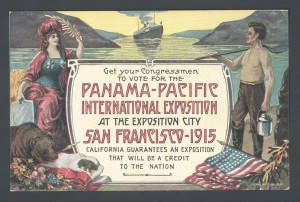 On March 21, 2015 a new temporary exhibit will open celebrating the Chinese shrimping villages on the San Francisco Bay with a focus on the shrimp camps in Richmond. The exhibit will use a combination of photographs, archaeological collections, oral history and family recollections to tell the story of the Chinese shrimpers in Richmond. The show will include artifacts related to historic shrimp camps on the Richmond Bayfront that were recovered from an archaeological excavation that took place in 2008 and have never before been on display to the public. The exhibit will be open until Sunday May 24, 2015 and is free with general museum admission. Museum admission is $5 for adults, $3 for seniors/students, kids under 12 are free with paying adult and members are always free.

In conjunction with the exhibit, Mr. Calvin Fong will speak at 2 PM on Saturday April 11, 2015 about his father?s experience owning the Fong Wan Shrimp Camp business in Richmond during the 1930s-1940s. Fong Wan was a Chinese immigrant and successful entrepreneur in Oakland who established a shrimp camp and shop in Richmond. Calvin Fong has devoted considerable time and energy researching his father?s business and his research reveals an interesting picture of Chinese shrimping in Richmond. The program is free with general museum admission. Click here to view Herb Lore (1936) by Fong Wan on the internet archive.

Do you know a story from history that should be the topic of an exhibit in the Seaver Gallery? If so, please contact us at info@richmondmuseum.org!

The Richmond Museum of History is a little known jewel and the most significant local history museum in the East Bay. The museum is housed in a Carnegie Library built in 1910 that boasts a permanent exhibit gallery and also the Seaver Gallery, a space for temporary exhibits and special events. The Museum draws from their extensive permanent collection of historically significant objects and documents to stage exhibits and host educational programs for the benefit of the public. The Richmond Museum of History has had a presence in the Iron Triangle for sixty years and we are proud to be cornerstone of the community.

Current Exhibition in the Seaver Gallery

“How World War I Changed Richmond”

The exhibit features dozens of World War I related artifacts with connections to Richmond, California. Many artifacts have been in the Museum collection over fifty years and will be on display for the first time. The exhibit commemorates the centennial of the United States involvement in the Great War and is unique in the San Francisco Bay Area. The stories of Richmond residents from all walks of life who were involved in World War I both at home and on the front.