Thanks so much to all the members of the Richmond Museum Association (RMA) who attended the annual meeting on Sunday February 26, 2017! The event was productive, informative and fun! Executive Director Melinda McCrary provided a report on the 2016 activities at the Richmond Museum of History. Director of Ship’s Operations and newly elected board member Johannes Hoech gave a similar report for the SS Red Oak Victory. Congrats to both Melinda and Johannes for successful 2016 at the Museum and Ship!

Congratulations to the new RMA board members that were elected by the membership at the meeting! Michael Davenport, Lynn Maack, Johannes Hoech and (incumbent) Jeffrey Wright have joined the board for the 2017-2020 cycle. The meeting finished with a riveting presentation by Mayor of Richmond Thomas K. Butt. Thank you to all who attended and for your continued support!

RMA Fundraising Dinner at the Galileo Club on January 29, 2016! 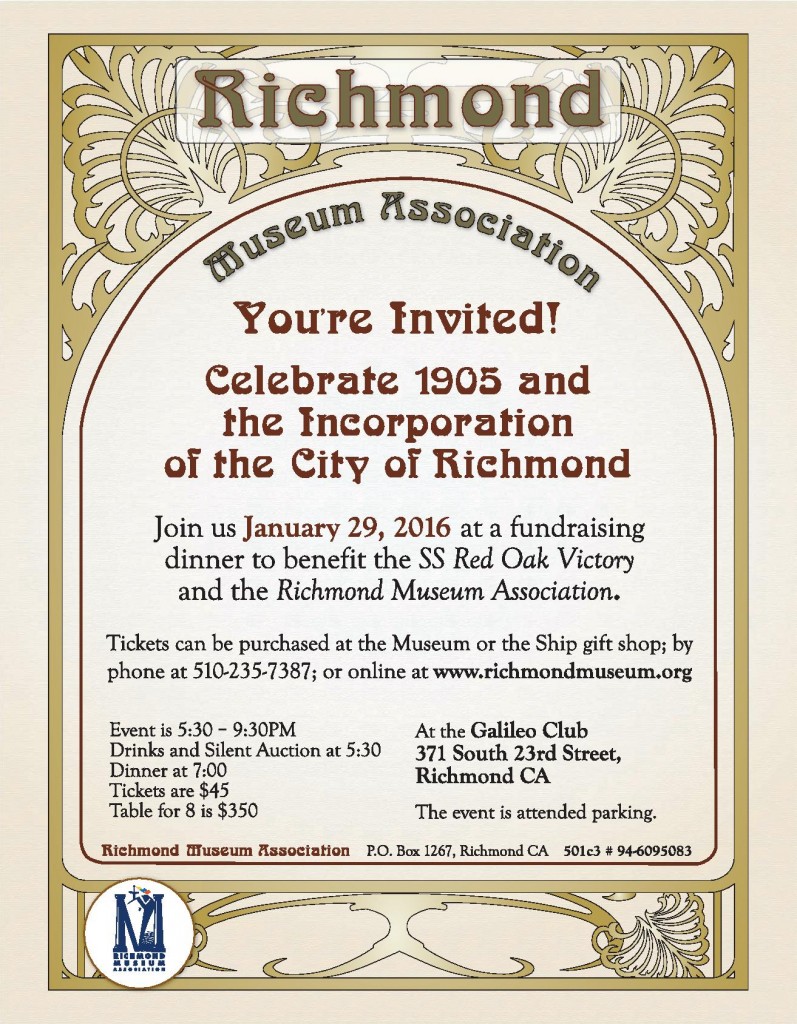 The Galileo Club hosted a dinner to benefit the Richmond Museum Association on January 29 and a good time was had by all the guests! Thank you to everyone who joined us on January 29, 2016 to Celebrate 1905 & the Incorporation of Richmond!

Thank you to Richmond resident Lisa Foote for capturing the evening in these lovely images!

The Richmond Museum Association is delighted to unveil our new logo courtesy of Jan Brown and?Spokewise! The marketing project and logo redesign was generously funded by a Capacity Building Grant courtesy of the Richmond Community Foundation.

The board and staff of the RMA are proud of our new logo that unites our two greatest assets: the Richmond Museum of History and the SS Red Oak Victory! 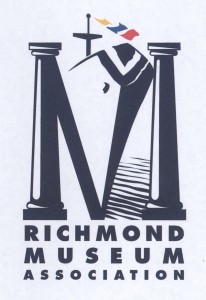 What does this mean for the future? You can expect to see a whole new suite of signage at both the Richmond Museum of History and the SS Red Oak Victory! We also hope to have new gift shop items featuring our new design.

An Afternoon with Calvin Fong Program is a HUGE Success!

The Richmond Museum of History hosted Calvin Fong on April 11, 2015 to speak about Fong Wan’s shrimping business in Richmond from approximately 1934-1948. We suspected the program would be popular as we had many phone calls inquiring leading up to the day, but we were happily surprised that nearly 100 people were in attendance! We literally did not have enough chairs for everyone, so it was standing room only!

Many descendants of Chinese shrimpers from Richmond were in the audience as well! Elaine Lee Wong who is the daughter of Gar Lee, the general manager for Fong Wan Shrimp Company graciously attended and it was her first time at the Richmond Museum. We were also delighted to have many members of Fong Wan’s family in the audience including four of his sons and at least one Granddaughter. What a treat to learn that one of the Fong brother’s flew in from Colorado Springs just to attend this program at the Richmond Museum.

Thank you again to Calvin Fong and the entire Fong family for sharing your family history with the Richmond community!